Antoine Chaillon is an Assistant Professor with the Division of Infectious Diseases. 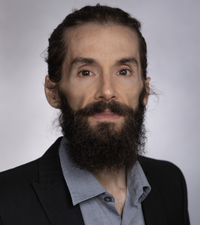 Antoine Chaillon, MD, PhD is an Assistant Professor in the Division of Infectious Diseases, Department of Medicine at the University of California San Diego. He received his Medical Degree with a focus in Cellular and Molecular Infectiology, Vaccinology and a Master's Degree in Infectious Diseases, Virology, Bacteriology, Parasitology, Mycology, Hematology and Biochemistry in 2009, from Tours Medical University, France. Subsequently, in 2012 he was awarded a PhD for his project titled "Contribution to the identification of molecular determinants of resistance to neutralization of HIV Env glycoproteins" from Tours Medical University and obtained a two-year Fellowship from the French National Medical Research Agency (INSERM). He was more recently awarded by the Bettencourt Schueller Foundation in 2015 for his work in the field of HIV Viral Evolution.  He has a broad background in bioinformatics, molecular biology, and viral evolution. Since 2012 he has been working in the Translational Virology Core. During this period, he has had the opportunity to work closely with Dr. Davey Smith and with several leading local HIV investigators and he has greatly improved his experience in bioinformatics which includes generating and analyzing viral sequences, including high-throughput next generation sequencing and in evolutionary analyses using the most recently developed bioinformatics approaches.